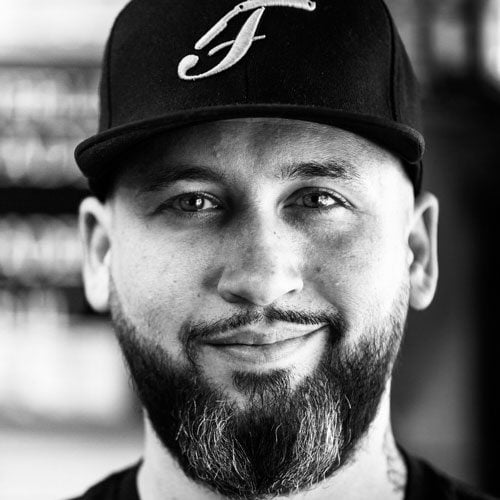 At 14, Rory picked up his first set of clippers, cutting hair for his friends and family in his New Jersey neighborhood. At 17, he shipped off to the US Navy, where he gained more experience barbering and, in 2004, used his Gl Bill to attend the Paul Mitchell Parisian Beauty Academy. After his first month, Rory entered and Won BEACON. It was a turning point in his life, changing him forever as he realized he was the only barber selected. Rory met industry icons like John Paul Dejoria, Winn Claybaugh, Vidal Sassoon, and many others, opening his eyes to the power of the beauty industry for the first time.

In 2006, he relocated to Virginia and became a learning leader at Paul Mitchell The School (PMTS) Tysons Corner. He grew as an educator working backstage at events like Caper and Gathering. In
In 2010, he became the director of a Paul Mitchell focus salon, learning the business behind the art of hairdressing and continuing to grow in the industry by working on editorial shoots, fashion shows, and platform events.

In 2012, Rory’s role changed by returning to the PMTS world to develop his sales and operations skills.

In 2013, he became a member of Paul Mitchell’s Advanced Academy Men’s Cutting Team, focusing on bringing a barber’s attention to detail to the salon world. Annual “FunRaising” and Caper events became his focus to inspire the future generation of hairdressers worldwide.

2017 Rory opened Faded Dream Studios with his wife, Dina. Their very own private space for learning to create and to service guests.

was built. A great Online Resource featuring a Barber Education library of Over 100+ training videos to follow up with, especially after a live class.

Having a class with Rory is a fun, healthy mix of Motivation, Education & Entertainment.

His class will cover a range of lessons from Shear Theory to Hair Types. You will learn real Short to Long Hair Cutting Techniques, especially the “Controlled Shear Over Comb.” He doesn’t teach you a haircut. He expands the way you look at haircutting.

Barbers & Stylists will feel more empowered and dangerous after one of his classes!